- February 02, 2020
Adults who deliberately scares the living daylight out of children with doomsday prophecies are in my opinion cruel & a tad retarded. A parent's duty is to be their safe haven, a lighthouse & to guide them through perils by giving them tools so they can be functioning adults one day instead of drivelling buffoons in need of safe spaces. Unfortunately nowadays we’re constantly reminded of the doomsday clock's ticking towards the point of no return. Just to be clear, I was rolling my eyes as I wrote that.


Where I live we’re having the mildest winter in a long time, & that of course is another indication that we’re doomed & humans are to blame, right? Well, let me ask you this: Was it humans fault back in the late 80s, beginning of the 70s or mid 50s? …or let us go further back, was the litte ice age humans fault? …medieval warm period, the 500s or roman warm period? See, I’m not saying that the climate isn’t changing, but I am however questioning the narrative that humans actually can change it. Of course there are A LOT I don't know, but my logical spider senses are tingling nonetheless.
Now, I'm not opposed to being environmentally friendly. It's important to not litter & to be ethical when it comes to consumption of goods...& to be aware of the climate & its changes, But what I find annoying is that there are a lot of focus on people screeching at the Western society like the ilks of Greta Thunberg & there’s almost crickets when it comes to people like Boyan Slat - who actually invented & made a contraption that in this very moment is cleaning up the oceans & rivers. I know the answer to this, cause my education is advertising design & marketing, which is all about illusions & getting you to buy sh*t you don't need. But I like you to ask yourself - Why isn’t people like Boyan Slat invited to speak in front of the UN, Davos, etc. every single year? Why aren't governments throwing green tax money at him to get his contraption multiplied on a higher rate than now? Why are people in high places bitching about pollution, plastic in the ocean, etc. But there’s not that many of them actually doing anything practically to eradicate the problems. Practical solutions seem to be ignored, cause we just need to tax our way out of climate change, don’t we? Plus then there's the whole eradication of fossil fuel, which actually has lifted nations out of poverty, & still does! It's a crap shoot with any new so called environmentally friendly green energy... I just think we should take a more reasonable approach. Lift more people out of poverty using old proven, stabile ways, whilst simultaneously finding better ways of creating energy. I just can't stand it when anyone makes decisions based on fear of the unknown. Sh*t like that just makes me livid. 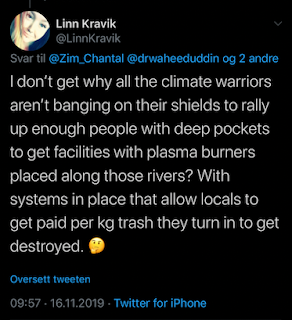 But what provokes me even more is teachers, politicians, media, celebrities, etc. frightening kids with all this gloom & doom scare mongering. It’s like I’m watching f*cking mass hysteria unfolding right in from of my eyes & it’s unsettling. What kids need isn’t some hypothetical crystal ball prophecy. They need to be taught to focus on what they actually CAN change in their own life…& if you as a parent have some sort of anxiety about what will unfold in the future, teach them how to handle that! Don’t pass along your angst.
Seriously, if you think we’re headed down the path of a dystopian future, like a pathogen wiping out a wast amount of humans…maybe instead of conveying that to your kids, teach them how to protect themselves in case of an emergency like that. Teach them how to grow their own food, make a fire, filter water & so on. Let them join the scouts to learn basic survival skills. Make it fun for them whilst teaching them how to be capable in any crisis. But without giving them anxiety of some mumbo jumbo that so far only occurred in your head.


…& teach them how to acquire knowledge on their own. Enlightenment comes when we as individuals seek out as many sources of information as we can. Cause being told something by another person is fine & dandy, but it also comes with a certain amount of bias. So whenever kids ask a question you can’t answer yourself, then tell them you can find it out together. Go to the library with them, search the internet…let them see how much information that’s out there & that it’s like a treasure hunt going after it. Then watch them bloom into this curious being that doesn’t fall victim to hysterical propaganda. Cause they know that the whole truth is out there, but it isn’t necessarily what’s being served up on a silver platter.

Remember that you only have them for a few years, then they’re off into the big world…& it’s up to you how big of a toolbox they take with them.

~Linn.
I brought children into this dark world because it needed the light that only a child can bring. ~Liz Armbruster.
Ramblings