- July 25, 2018
Even though it was hot as hell outside, I decided to go rummage around the local thrift store today. It was 30% off of everything, so bargains were a strong possibility. Ended up going home with 3 items for next to nothing… It’s a short walk, but balancing 3 rather large items with the wind trying to lift up my shirt at the same time was kinda challenging. Hey, I ain’t about to be the prime obsession of a local Ahab by exposing my white blubbery summer bod'. No way, Jose...we all know how that ended. 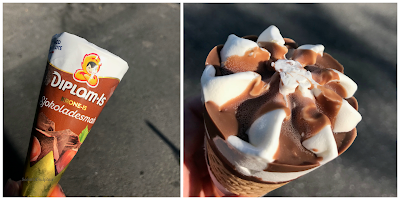 After a few hours tinkering around with my new projects & cleaning the office, I got a craving for meat & ice cream. No, not combined…can’t really see meat flavoured ice cream becoming the next big thing, ever. So threw together a couple of potatoes, some veggies & chicken in a pan & stuffed it in the oven & ventured outside again in search of the sweet stuff. …& in true form, dessert were basically inhaled on the way home. Made me nauseous & it was calories I definitely didn’t need, but no use crying over spilt milk.

Kinda dreading tomorrow… Have to start sorting through all my paperwork. Don’t get me wrong, I enjoy organising things, but right now I wish I had someone who were on top of that part of my life. I don’t know, maybe I’ll be a bit more enthusiastic after I get some shuteye. :)

~Linn.
Seize the moment. Remember all those women on the Titanic who waved off the dessert cart. ~Erma Bombeck.