- July 19, 2018
Scrolling through social media makes me realise that the world’s being dry humped by people with borderline personality disorders. Seriously, who the hell takes pictures of their blood soaked pads & post it online?! Get a f**king grip & some damn self respect while you’re at it. 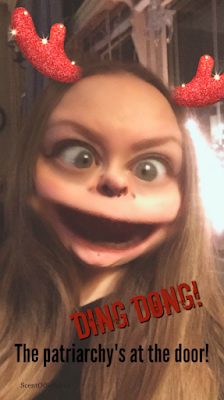 No, I'm not shocked. What I am is rather nauseated actually. Plus it’s this relentless man bashing going on at the same time that aggravates me. If they’re so appalled by men & can’t stand to be around them, then why not smear the menstruation blood all over their face? Let’s name it Modern feminist war paint…my guess is that it’ll take care of that problem all by itself. Hell, why not go all the way while they’re at it & smear their own sh*t over the rest of their bodies? Even better, let’s bottle that crap up & call it: Man Repellant. It’s organic & fresh! They can bring it everywhere & just lather it on whenever they feel the patriarchy’s honing in on them.

I always grew up seeing strong women on tv, heads of states & some badass women in real life, who didn’t take sh*t from anyone. But not once did I see any of them put men down, sure there were banter, but there were no animosity or hate. So this whole Men are the root of the problem crap is just a load of crock. Who the hell raises these so called "bad men" then?! At what point do they turn into the spawn of satan?! When did feminism become the Eradicate all men posse? It’s ridiculous!

…& no, I’m not an ostrich stuffing my head in the sand. I know many women aren’t judged by their merits in boardrooms across the world & that many of them must work twice as hard as their counterpart to get proper recognition. I wish there were 100% equity, that women were treated solely by their accomplishments instead of having their gender factor in. Are some men insecure nitwits in those regards, definitely! But that doesn’t equal men being the enemy, that we should hate & abort male babies cause they're future oppressors & rapists. People who say that have the right to say & think whatever they want...but I preserve my right to believe they’ve gone off the deep end & need to check in at a mental institution. Simple as that.

~Linn.
Every form of addiction is bad, no matter whether the narcotic be alcohol or morphine or idealism. ~Carl Jung.

Chuck said…
Totally understand where you're coming from. I see it too. Half the reason I can't stand 'feminism'. I totally support equal rights, etc., but the misandry that I see, due to factors that we (cis/het white males) didn't choose, we're obviously rapists, and anti-equal rights. I thought feminism was *equal* rights, as in, everyone that comes to the table, has equal say (within obvious reason). I personally don't feel that's the case.
21 July 2018 at 01:32

Linn said…
I have to admit that I’ve developed a healthy dose of adversity to so called “feminism”. It’s somehow been defiled & warped into something disgusting & one sided...& you’re right, equality is almost non existent if you don’t think like them...& if you have the audacity to question any of it you’re instantly the enemy. It’s hypocrisy with a huge dollop of hysteria.
Women who fought for my right to vote did so with the support of many men, that is often ignored. It’s also often forgotten that we’re not adversaries, but teammates & when men & women work together, most boundaries are obliterated.
22 July 2018 at 02:49