- July 27, 2018
There’s something very rewarding about going outside in your garden & getting your own food. A couple of potatoes, soil, water & time, & before you know it you have weeks worth of dinners. 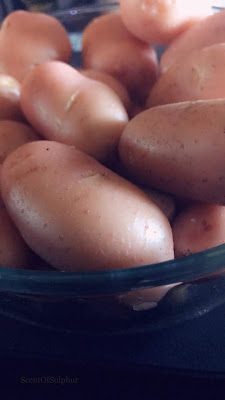 I’ve wanted to get a bunch of old bathtubs that people give away, spruce them up & use them as raised beds. But after I moved to the edge of civilisation, doing things like that have become a logistical nightmare. Plus I hate asking anyone for help… I’d rather drag the bathtub back home than ask for a hand. Heh… Ok, maybe not that bad, but pretty darn close. ;)

Btw, yesterday I wrote that the meteorologists predicted high temperatures today…& boy were they right. Loads of heat records were broken all over Norway. Funny, cause at a point I started rooting for our county to get the highest temperatures. So, yup...it’s official, I’m a pensioner. Next thing I’ll be sipping on prune juice & wearing velvet track suits, shuffling my way towards the local bingo hotspot. Yay...

~Linn.
Sometimes on lonely nights the man in the moon is my best friend. ~Terri Guillemets.
Homegrown Ramblings