- July 01, 2018
The birds started chirping just before 04:00 & the scent of dawn filled the air. It’s just a strange time to be awake... Especially if there’s nothing to do, no job to get to, no kids, no love to snuggle up against, nada. You just sit there & stare out at nothing whilst the light fills the room. Just a few hours earlier I was out walking, it was just past midnight & you could still see the pinkish hue in the northwestern sky... 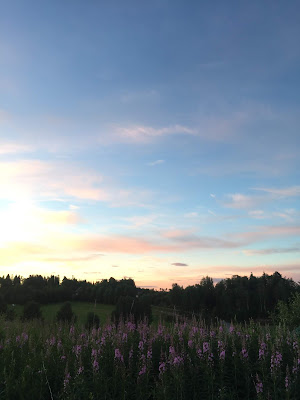 Picture taken in Rakkestad on summer solstice.
That’s one of the things I adore about mother north, her seasons are, in lack of a better word, formidable. Although we had a few weeks with extreme temperatures, usually not a fan of those...but I have to admit that I enjoyed that too. It was lovely standing outside feeling a sort of hellfire breeze gently caressing my skin. Anyway, enough about the weather...

I’ve been quite ill lately. In a weak moment, I actually begged to die. It feels kinda ‘off’ to write it, but the i.i.h. is there & there’s no point in denying that it feels like the pressure in my skull’s about to crack it open sometimes. Have to admit though, that something definitely cracked in me this time...as always though, my solution to healing was solitude. Thing is, this time, I felt it in my bones. It was like someone had carved the word “Alone” on them with the tip of a dull knife... I don’t mind solitude, I just don’t want it to be all I am all the time. Same with pain, I can take it...just not all the time.

~Linn.
"A sad soul can kill you quicker than a germ". ~John Steinbeck.
I.I.H.