- January 14, 2018
Imagine constantly getting exposed to pus & abscess from people’s open wounds... The putrid smell & constant oozing from the maggot infested lesion is straight in your face no matter where you turn. That’s how logging onto social media feels like these days to be honest. It’s like a mindless humming of utter bullsh*t...& I am guilty as hell for humming along with them at times. I miss smelling old books, reading them, learning things about history, nature, etc... 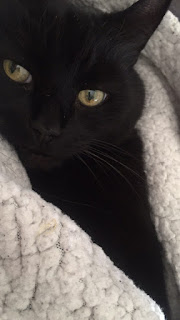 Anyway, I really dropped in to say that I had a rather lovely weekend. My son was here with his friends. The laughter & music filling the house when they’re here always lifts my spirit.
A few minutes after they had left, it all took a rather abrupt turn though. My cat had a seizure. In almost 17 years we’ve never had any trouble with Loke. So it came as quite the shock for my son & I. It was awful seeing it. Talked to a veterinarian & she said that it seemed like an epileptic seizure...& in old cats that almost always means there’s an underlying cause, like liver/kidney failure, brain tumour & so on. She also said that if it happens again & he dies, before we get an appointment at a veterinarian clinic that can do all the necessary tests on him, she assured us that we should not blame ourselves. Cause it probably means that there would've been little they could've done to save him anyway. Heartbreaking seeing him like that though... Afterwards he had trouble walking, he just stumbled across the room. He's been sleeping a lot after that & his eyes seem rather empty. I know it's a weird thing to say, but he's always had a little devilish twinkle in his eyes. Made me start crying when she said it though. He's a familiar, one of the pack & somehow still that little one sleeping inside my bra... I'm not ready to say bye to that just yet. So fingers crossed it's going to go well, that he'll actually see his 17th birthday.

Unknown said…
So sorry about your precious cat. Whatever happens in the future, take comfort knowing he had a good life. He is loved, cared for, and needed. That is as good a life as any animal or human can want.
16 January 2018 at 01:17