How LOw can you go?

- May 12, 2017
Today 193 voted against 117 from LO, the Norwegian confederation of trade unions, to boycott Israel. A jackhole even proclaimed "Enough is enough!" ...& probably pounded his chest at the same time as air deflated from his facial rectum. To me it seems like LO's more of a political party than an organisation looking after its own members. 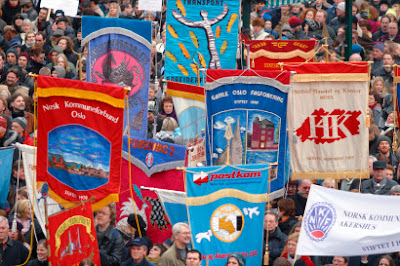 Source
How come people feel it's justified to boycott Israel, when a boycott of Saudi Arabia till example - which human rights abuse is far worse, is out of the question? Sometimes I wonder if the Blitz movement here in Norway altered the brain of many of the people we see in power today. Hell, even I was drawn to it for a little while...not in their heydays of course, cause I was like 4 back then...but I had a slight fling with it & I remember visiting their place in Oslo & I'm sorry (NOT), but it was a pile of sh*t & I felt like I was hemorrhaging braincells the more people I talked with there. It was an attempt at indoctrination which I really didn't like. It got me thinking about how many which grew up with those views, who still think that's relevant today. ...& I somehow feel like there's a remnant of that still lingering in peoples minds. People who inhabit offices around the country, with positions of power. Inside I just want to scream: Who are you really? ...who can sit here in picturesque Norway & make decisions that won't have any effect on you, but might lead to even more suffering & injustice for others? Who the hell gave you a moral high ground to toy around with other peoples lives? You don't live there, you don't truly know what's going on. Neither do I. But I still try to seek out relevant up to date information. I try to watch videos of people traveling or living on both sides of the border. Through that I've discovered that people from Israel are banned from travelling into certain countries. I also know that non-muslims are not allowed to travel freely into Palestine. I know that Israel treats a lot of wounded people from the war in Syria. I'm also not blind to all the bad things that's going on. But I chose not to listen to the unhinged people who only scream bloody murder. I chose not to listen to those who only see what they want to see & what fits their worldview. Of course there's injustice in the world, it will always be like that...humans will never change. But is abandoning dialogue & diplomacy the way to go? ABSOLUTELY NOT!
I remember seeing Carl I. Hagen talking in my home town when I was younger. The anarchists & punks turned their back to him & raised their middle finger in the air all through his speech. I stood there & thought to myself that what the f**k do you achieve by that? Why not listen to what he says & argue against it? He's still going strong & his political party has been in power for the past 4 years, so their shunning didn't work now did it? So my point with that little anecdote is that boycotting Israel haven't worked & it never will. The only way to get through is to be adamant in the pursuit of peace through dialogue...& you most definitely won't be able to do that with your back turned against it.