- July 01, 2016
I haven’t really had anything to write about in quite some time. But logging on to Facebook today made me grin...& quite fired up actually & this is why: 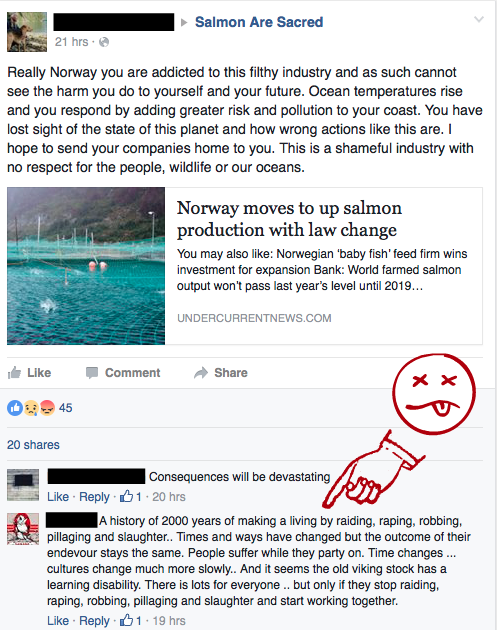 As a Norwegian who loves her heritage to bits it kinda got to me that someone would write that. But mostly because I’m one of those who doesn’t eat farmed fish & I haven’t done so in years. It’s been my silent protest. Silent, cause I learned a long time ago that my single voice doesn’t have an impact on politicians or the so called “system”. But I recon my wallet has…so my conclusion was to just stop buying their products. My hope is that more Norwegians will do the same, but most of them are still in the dark when it comes to what an impact our current fish-farming industries have on our coasts…& even more so on other countries’ coasts. I had a hope the Norwegian industry that established internationally, would at least do it in an ethical way… With the mariculture in closed tanks with a system which would clean the wastes before it entered the ocean again. But instead they insist on continuing in this antiquated demolishing form, ruining amazing ecosystems abroad…& at home, just for profit. Now I’m not disagreeing with the issue at all, but blaming a whole nation cause someone has found a loophole in a legal system or circled in officials who puts profit above ethics & laws? …that just ain’t right. If you truly want to change the industry I think the solution is first of all to help enlighten the Norwegian people, not to attack in a derogatory manner. Most of them don’t know what’s going on, cause the media seldom report on it…& I highly doubt that Jane & John Northman will google “Fish farming Norway Canada” or something similar to that on a daily basis. So instead you should flood the Norwegian newspapers with your stories from abroad…& if you got a signed petition on - lets say - Avaaz, with more signatures than we have people living in the country (5 mill. +), that tsunami would open the eyes of our politicians & maybe then changes will happen both here & abroad. ...& we do have people fighting to get the fish-farm industry in closed tanks & even up on land. There are people trying their very best to get awareness here in Norway. But my experience is one met with scepticism & most people look at me like I’m nuts when I tell them why I’ve stopped buying & eating farmed fish… Cause *drumroll* the government still say that eating it is good for you & OF COURSE fish is good for you! But lets face it, most people are bewildered sheep & slavishly follows the governments every beck & call. So they buy the fish, regardless of where it's from...& hey, I can even semi-root for farmed fish in closed land-based tanks, fed ecological pellets. BUT to end on a personal note: The only fish that will enter MY body are the ones caught in the wild.

...& if you ask me why I'm not out there protesting & enlightening people; I can't even convince my own mother to stop buing the s**t, so I doubt I'd be more efficient with anyone else. ;P

Now I’m off to pillage the f**k out of my local grocery store’s ecological produce. ;) To Valhalla!

-Linn.
"In the spider-web of facts, many a truth is strangled." -Paul Eldridge. 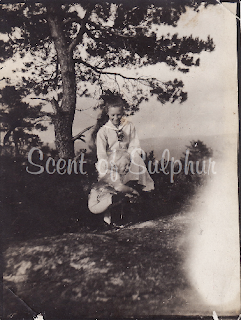