- December 03, 2012
Tiny snowflakes dances outside the window now, & I'm under the covers freezing! When I start to build the house I'll insulate with wool like there's no f**king tomorrow! ...& I'll install a crazy amount of fireplaces. See I don't mind the winter at all, 10 meters of snow - nooo problem, but I do mind freezing when I'm INSIDE. It's probably number one on my stupid-list. :P Well, aaanyhow... When I'm cold my mind usually take me to warm places, & today I ended up in Lusekofte land. So, do join me on this short tour of Norwegian knitwear.

This is called a Lusekofte

It dates back to the time when we huddled together in front of a roaring fire, told each other stories & used oil & candles for illumination. It kept us warm when we went outside to chop wood for our fires & it made the most rugged man look suitable for wooing the loveliest girl in the village & vice versa. ;)

You can buy one like this here.
It comes in a variety of patterns, but in order to be called Lusekofte, they must have the small lice looking pattern. (Lus = Lice) People do experiment & indulge vastly in "knit'ivity", so now there's no limit to what's been made with this pattern... Mittens, pillows, scarves & so on. ;) I'm contemplating acquiring one of these marvelous knitted wonders myself! Since it's my birthday in a few days & all... :P At least it'll keep me warm! Now let me introduce you to the Marius sweater. 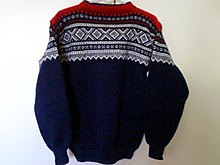 This nifty little thing was inspired from an old lusekofte, but without the lice pattern. A lady named Unn Søiland Dale made it for a film back in 1953 & voila! it was in mass production.

From the Norwegian movie"Troll i ord" (1954).
It comes in a variety of colours... But even though I always wear black, I am kinda partial to the red, white & blue. Guess it all boils down to personal taste with a hint of patriotism, right? ;)

By the way I think my brain's on shut down due to the cold temperature inside...cause I'm seriously contemplating getting one of these One Pieces too. Just to pitter patter alone in my fluffy slippers around the house with a huge cup of tea, wearing one seem sooo cozy! xD

Well, hope you enjoyed the tour. ;) I have to scrape the ice off the window (yes, on the INSIDE!), eat a late lunch & take a few pics of the cards I've made. So I'll be back later. Have a lovely day!

It's past midnight, 1:05am to be exact & I completely lost track of time. I'm sorry, but I really don't have the energy for downloading the pics now... Gonna dive - head first - into bed. Hugs!