- October 08, 2012
It's been a loooong day. Haven't really done anything constructive. Just been achy all over..bah! :( So, I've been watching the news most afternoon & that's just about it. The national budget's been the talk of the day & it managed to piss me off after only 5 minutes or so. It's a luxury problem of course. I'm not stupid, I know there are people out there that's suffering... But still, I think that since we're so well off there shouldn't be anyone waiting in line for reconstructive surgery after battling cancer. Or old people, who helped build our country not getting the proper care. ...& why don't we - who have a mountain of wealth to help people outside our borders - have the means to take care of the buildings that houses our future businessmen & women? How can they expect today's youth to stand on their own two feet & carry our nation forward, without having a proper education in a safe environment? Sometimes I wonder if this system - instead of nurturing the ability to be self-sufficient, rather makes people codependent...? But hey, what the hell do I know? I'm observing, experiencing & just trying to make sense of it all. There's a thousand strings being pulled at every given moment... & who am I to judge a weak spineless puppet on a string trying to climb the corporate ladder?
I'm glad we're able to help others out there in the world. It's good to be able to be part of that side of humanity. I just hope that the government could see that by helping ourselves now, is making the foundation for the next generations so much stronger. ...& that the generosity they'll be able to show & the abundance they'll be able to share will be so much greater. Paying it forward. Those are my favorite words at the moment... Paying it forward. 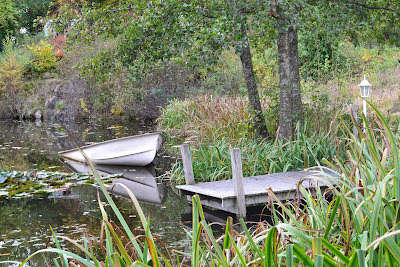 I enjoyed strolling around Røed gård yesterday, loved the serenity. :)

Dead tired now! Hope I'll get some sleep & that I'll be able to finish the box I bought tomorrow so I can have something interesting to blab about. Going to dig up some old black & white photos soon too. Annoying that I haven't kept it up...cause I really love digging through old family histories. ;)

~Linn.
Politics, it seems to me, for years, or all too long, has been concerned with right or left instead of right or wrong.  ~Richard Armour.