- February 17, 2012
The melancholy's just building up inside me... Taking down the last few things off the wall in a house I've lived in since I was 8 is quite sobering, sad even. Knowing my grandpa was part of building it makes my heart heavy. :/ This is a picture from the end of the 1940s, just before they started to build this neighborhood: 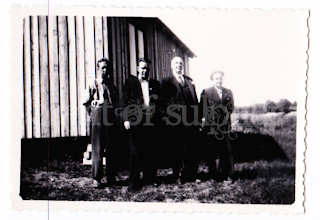 Here he is, 2nd from the left. This is taken before this whole area - called Bellevue was developed. The tall guy in the middle is a councilman called Arne Magnussen - I think, & apparently a Mr. Holberg. Have no clue who the last man is.

I find that touching the mortar between the red bricks in the chimney brings back memories. Especially of my grandma going outside with her brown plastic-can to get the paraffin/kerosene out of the huge metal drums outside. Then she went into the basement to fill up the oven to warm the place up. Here she is on the terrace in july 1969: 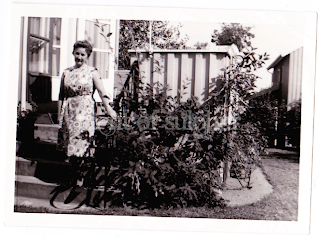 On the back of the pic she describes herself as a fatty. LOL!

...to her right was a Cytisus or Gyvel as we call it. It was beautiful, with loads of yellow flowers. They also had these huge yellow roses outside. My mum planted my favorite - Honeysuckle, just around the corner to the right. The smell used to reach the 2nd floor every summer & filled my room every morning. Waking up like that was grrreat. :) Gosh, I even remember how my grandma's soup smelled...& coming home after school going upstairs & playing cards with her, plus sitting at the kitchen table writing poems. I miss that warmth, I really do. Even when my mum lived here that warmth still lingered. :) 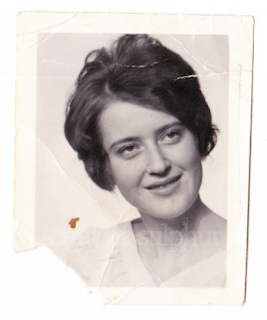 Found this picture of my mum when she was younger. Quite the looker ey? ;D

...it's been cold here for the past 6 years...& I do mean that quite literally too. F*****g freezing in the winter, had down to 7C at one point. But I hung in there...what for? I really don't know. Loyalty maybe? Right now I feel like it's all been a waste. Can't get it back, but it could be fixed...I just don't see why anymore. Therapeutic or not? - I find myself hugging that chimney more often than I think is healthy, or even sane. Guess I'm soaking up the atmosphere or something... This atmosphere: 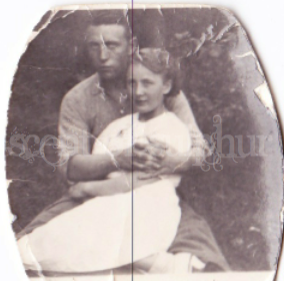 Cutest couple in the world! ;D

How do you say goodbye to your family home? I know now how my grandmother felt when she "lost" her's. It's kinda like a really bad breakup. The one you just sit around crying for days on end, hopelessly waiting for someone to come & tell you it's all been a bad dream. But it isn't, is it? It's just bad decisions leading up to an inevitable ending, in a story I really didn't have a say in. Am I angry or disappointed? No...or maybe, with myself....for spartanly saving up for this grand dream of mine, whilst getting stuck in another's. I'm more heartbroken really, for not leading the life I should've led...& that's not solely drifting towards the grand goal, but more about using the gifts I've already been handed. Cause what's the point in having anything - if you don't use it? I know I'm cryptic...but to put it simple: I have a chance to turn a new leaf, but I have basically no clue how to really let go...& that makes me think that this is really no time to make any huge life-altering decisions... Just a single step forward. 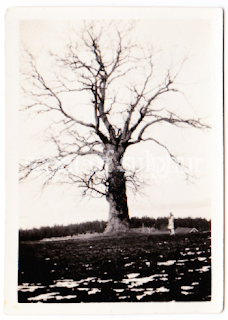 While digging through some of our old family photos I found this. The old oak was called Ramberg eika. It stood not that far from here & it apparently had reached a 100 years in that pic. Beautiful wasn't it? :)

Actually looking forward to tomorrow, the winter holiday begins here. So ice-skating & blue bottoms it is! ;)

~Linn.
One problem with gazing too frequently into the past is that we may turn around to find the future has run out on us. ~Michael Cibenko.
Heritage