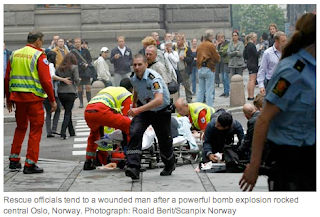 Sitting here surrounded by white candles, trying to make sense of it all... On friday the music was flowing through the radio, when suddenly a man started speaking about a bomb going off in the middle of Oslo. My instant reaction was: "Is this a joke?", but it soon became apparent that it was more than real. I didn't get shocked, cause it's only been a matter of time... But it was extremely surreal!! Cause the kingdom of Norway's been a fairly safe place to be. We're actually able to take for granted the freedom of speech, beliefs, etc. But in my opinion the whole "open society"-coin has it's flip side... Like our open borders, which attracts its fair share of shady people. & it's safe to say that the whole downsizing the police, military & other security forces haven't exactly been the smartest decision. Why the people who are committed to keeping us safe haven't had the means to do their jobs properly is a question I've often asked myself. It's never been the politicians that's kept us safe, but they are the ones that gives the funding to the people who actually breaks a sweat doing it. This is harsh, but this unfortunately might be the time they reap what they've sown... I can't stop thinking that if the police had the resources to do their job a 100%, then all of this could've been prevented. But, my mind's filled with questions, assumptions, anger & sorrow right now. Not easy to wrap my head around it all when all the churning is going on "up there". But one thing that I've become very aware of this weekend is the people around the world - especially children, that calls attacks like this normal. It's very sobering... Just hope they feel the warmth from the rest of the world reaching out to them, in their time of need...but that may be wishful thinking? Gosh, my mind's in complete turmoil today... What an awful, awful weekend...


Friday was so surreal. It kinda had me in a cloud of haze...somewhat detached maybe. But when the mayor of Oslo - Mr. Fabian Stang stood on the stairs of Oslo town hall & spoke straight from his heart... It gave me something I felt had lacked from our leaders at that time. Eye contact, a pillar of strength & real heartfelt words uttered...he became the epiphany of solidarity at that moment & showed the core of what I feel is the Norwegian spirit. I'm immensely grateful for that, & I thank him with all my heart. 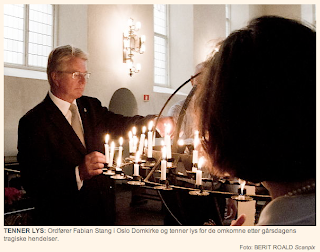 When the reports came in about a shooting at the labor party youth camp, the surrealism quickly grew into a complete tragedy. Having 9/11 in the back of the head, it was natural to draw the conclusion that the attack came from some foreign extremist group. But that a norwegian did this is incomprehensible...& it shows that extremists comes wrapped in any cloak.

Now my concern is growing about what this means to our society. I love our freedom, but I've always worried about the blue-eyed mindset people have a tendency to have. It's just wrong to sit in our corner cafes sipping foreign coffees with our noses pointing towards the heavens, while we talk about our peaceful ways. Especially when we're participating in wars! & it's just plain ol' madness to think that there aren't any evil lurking around in the shadows. Cause there are shady characters out there, with evil - sometimes massive violent intentions...shouldn't we have someone with the means to flush them out before they act on it? Not everyone is all la-di-dah, throwing flower petals around, gesturing peace-signs. I'm not saying an armed security guard at each corner. But more funding to the right instances like hospitals, fire stations, police stations, etc. ...our caretakers. So they can do their jobs properly.
Another thing I'm concerned about is how this will affect our politics...harsh yet again - but when the dust settles & we've started to heal...this is something the labor party can milk for all it's worth. & even though this has hit them the hardest, I kinda hope they see that their way of governing this country haven't always been the best way. & it might've resulted in one man going completely over the rail. & I don't feel it's the time to push harder on things they believe in, but rather - build bridges, listen to the people (even those who didn't vote for them), stop making election promises & breaking them...but focus on working towards a more unified future. It'll always be differences, but we need to (re)build this country by the help of human LABOUR & ingenuity, not just our oil.

Oh great Goddess...I just read an interview of a Utøya survivor...she said there where children having summer jobs there picking bottles & that they couldn't be more than 7 or 8 years old. I'm praying it ain't so...

I think this didn't really hit me until watching the prime minister read some names out loud today...felt like my heart got so heavy, almost unbearable. All the terror the people in Oslo & Utøya experienced. For some - the last minutes of their precious young lives were consumed by fear & helplessness...hunted prey by a calculating fanatic killer. I don't really wanna give him any more of my words, he already occupies enough of my mind.

Before I crawl up in my chair with a cup of tea & a blanket, I wanna thank my wonderful friends & family abroad. Your precious phone calls & messages this weekend's been overwhelming. Thank you for lighting candles for the ones who have passed, the ones that's left behind & the survivors. Love you beyond words!

I pray that they'll find the missing, so their family can get closure. Not knowing must be certain torture.

~Linn.
“We are so few in this country, Every fallen is a brother and a friend.” ~Nordahl Grieg.