- January 28, 2011
I've had the slowest day ever! Feels like everything happened in slooooow motion. o.O Anyway, gonna watch Lucky Luke...& mmmaybe I'll write some more after that. (Unless I've fallen asleep on the floor, chair or...you get the picture.) ^^

*A couple of hours later I'll never get back*

The movie was weird, but mostly funny. Made me laugh a lot when his boots where removed...really disgusting! :P Not a movie I would see again though...except to get a sneak peak at Jesse James' outfit. ;P 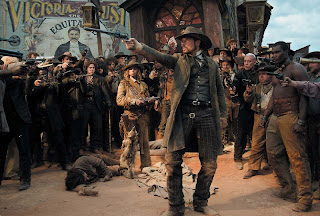 I so wish we all could be forced to wear snappy outfits like this. :P "Dress like the man you wanna be." Not everyone can pull of the outlaw look of course... ;) But I was talking with my niece this evening...& we drifted onto the topic. Cause she was in town shopping today, & when she went outside the mall there where these protesters or whatever...she said they where in the parking lot on their asses with a huge ass banner in from of them. Anyway...she didn't even notice the message they wanted to prevail. Mostly because they looked like a bunch of hobos huddling together. & I kinda understand where she's coming from. Cause when your appearance take all the focus from your words...how the hell shall people hear you & see your side of things? Like she said - it's ok if they have green hair, but do they have to look like they've rolled in a bucket of rainbow too? I've go piercings & tattoos...& I've looked like a train wreck. But if I had something important I wanted to get across I wouldn't dress up like a gothic moron with chains rattling & a lizzard on my shoulder. I'd look presentable. Cause like it or not, MORE people listen when you don't look like you're trying to revive the hippie era. NOT that it's anything wrong with that era...& I'm all for using your voice. But whenever someone's laying on the ground wearing a batik t-shirt with a pot leaf on it tries to convince me of things...no matter how noble the case, I DO QUESTION THAT PERSON. I dunno...maybe I'm turning into a prude in my old age. ;P Haha!