Written sometime in the morning...

- November 08, 2010
You know what pisses me off? People who feel sorry for themselves in a way that makes them infantile. ...& when they learn you have a diagnosis of some sorts they think they can come & complain, moan & groan to you. o.O It's like they enjoy wallowing in their own self-pity. & even more so - yours! :/ They even get offended when I say that there's nothing wrong with me. I mean...I'm not curled up in a corner jammering jibberish while I play with my imaginary flock of seaguls. I'm a functioning lunatic - as are everyone else in one way or another!! So why do they sit waaay up on their high horses & look down on people that actually are TRYING to go about with their lives regardless. That horse might kick them off some day. Doubtful, but maybe then they'll learn how to see things from a different perspective. Most likely they'll suffocate in the huge horse dung they fell face down in...cause they didn't know how to lift themselves out of the mess they're in. Should I feel sorry for them? Naaah, they've got that covered. o.O

It was a lovely sunday & it seems like monday's showing herself from an even lovelier side. But I had to stay inside yesterday. Cause I was dizzy again. It feels different this time...so I hope it'll just slowly fade away. :) Been keeping busy washing clothes, doing dishes, etc. ...& I have to say that walls are quite convenient when the vertigo sets in. They're good for leaning, bumping, sliding down & hugging. YES! -hugging! So I wanna thank the hard working people who built my home! Bless you & your amazing skills!! ;) I seriously thought I got rid of the vertigo... But it seems like I have to take another ride in the "bend & spin chair" at the doctors. Oh the baaaarfing joy!!! o.O

While the washing machine gently rocks my clothes...I've made myself a cupper & crawled under the covers. Been scrolling down some of Norway's biggest newspapers. Have to say that you really have to dig sometimes to find an interesting story. I know people are different. But for some of us that's not thaaaat interested in how much weight a celeb lost by being on Dancing with the stars or which fotballplayer f****d another footballplayer's wife...it's kinda difficult trawling a gazillion stories every day. But sometimes you find the little gems. & that often outweighs the journalistic tabloid poop. I found this one interesting. Where John Anthony West's in Norway to talk about redefining history. + the Gobekli Tepe find in Turkey.  I don't really get the whole "civilization began at a certain set time". o.O Do people actually believe that it was only growling retards that ran around hunting stuff before that? Ok, I'm simplifying. But if monkeys can paint...there must be someone that managed to drill a f*****g hole through a stone sometime really early in history?! If there's a will, there's a way! If I don't have a can opener & really want those hermetic pears I will bash that f****r in till it's opened. & I just think that quitters in that era were scars...most likely dead. We're creating new stuff all the time...but we're sure as hell ReInventing things a great deal too. Sooo... ;P

Over to a more enjoyable topic. At least for me! ;) The past few weeks I've been at a reuppolstering class at Gine's møbelverksted...which I enjoy immensely. I hate the springs in the seat though. Think they have this evil masterplan to knock me out. :P So I've been putting in extra nails & making knots that looks like a toddler made them. Woho! :P My next chair will be better...I hope. ;) Love the people there too. They kinda have this mother of pearl shine over them. Every day is different...& when they move, a whole new array of colors shines through. It's quite beautiful. ^^
Here's a few pictures of what I've done so far: 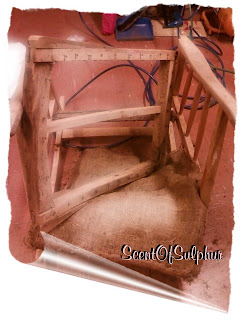 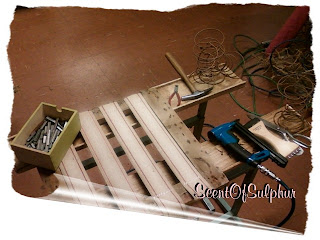 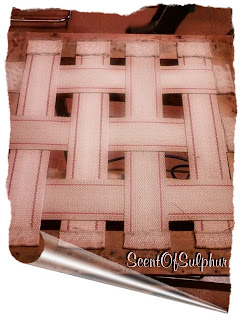 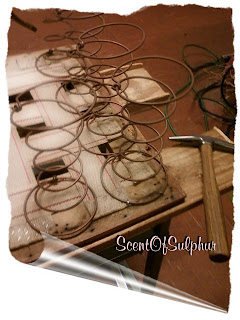 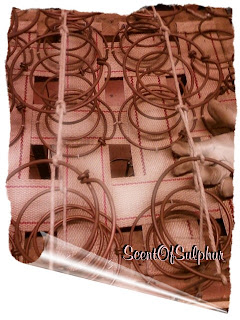 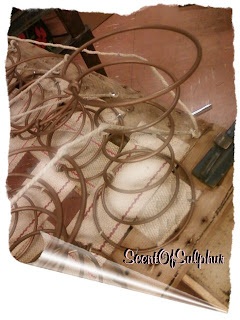 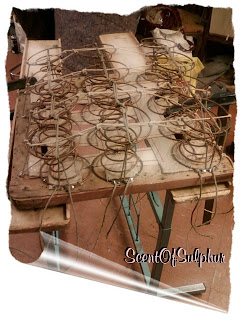 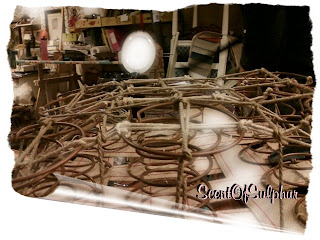 Damn, I do like sturdy things. That looks like it's made by a living creature. Not spewed out of some factory. I like to hold something in my hand & feel all the little 'mistakes'...& all the work that's been put into it. I like to see brushstrokes on an old furniture. I like ripping old worn jeans apart & make it into something new. I love when people really use their things & buy stuff that'll last a lifetime. ReInvent, ReDiscover & ReDesign! <3 Make it your own! (Stop buying s**t!!!) ...that's what it's all about. :) So for the gift giving season that's coming up I'm gonna do all of that. Every single gift will have some homemade part of it. :) & I'm really looking forward getting started. Juuuust have to get some needles for my sewing machine. o.O Again with the buying stuff...aaaaai! ;P