- October 12, 2010
Smelling like paint, with my feet up, drinking white tea & staring at Castle ! Had a good day. :) ...love when people have vast knowledge about things. That you show them or ask them something & they come up with an answer quicker than lightning. :) I asked someone about a little pillbox thingy my mum's uncle had. Cause my curiosity is extreme. Even if a toothpick catches my eyes I wanna know more about it. Like who had it...why is it there...blablabla. ;P He immediately said it looked like the Kosovo-Albania's flag. & it probably was just a tourist thing. :D But I got all giddy & the voice inside screamed: "YEAY! Happy-clap!" ...but now I have a ton more questions. Why did uncle have it? Where did he buy it? Did they go on vacation? Was it work? :P ...& what's up with the lion in the middle of it? Looks like the Macedonian lion...but think it's lacking a crown. You can see for yourself. ^^ 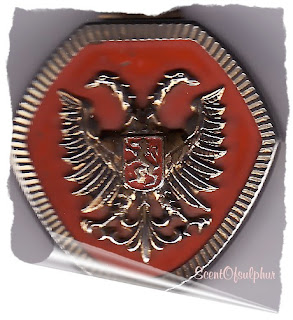 Crap pic as usual... ;P
I love old things that can be reused. These days everyone's always getting stuff that wouldn't really last a lifetime. But isn't furniture, trinkets & keepsakes something you wanna cherish...then hand down to the wee ones in the family? Doesn't matter if they paint it in another color or change the legs, etc... Just matters that it's getting used & have a purpose. & provides a little burst of sunshine in your heart. ;P *laughs*<3
Nite!