Thanks for the stroll. ;)

- April 26, 2010
This morning I woke up around 7:55. My mum called & chanted her "get-your-ass-out-of-bed-or-I'll-puuuuunish-you"-spell. XD I love her even more when she annoys me. Or when I talk about something she disapproves of...she just makes an agreeing "Mmfffh.." sound, but her eyes & energy just explodes. XD Hope I'll get to see the day she tosses that out the window & just screams: "What the fffff..iddle-di-do are you thinking with you mooooron!?!?!" That would be so great! XD <3 Anyway...when I finally got around to looking out the window...I saw this amazing grey veil over the town & the island. It was cold as hell, but the sun managed to sneak a few rays through...just enough to make all the car roofs twinkle down there at the docks...rushing towards their self-made destiny's. ;P I know that cars are polluting...& they really should start making a bunch of alternative cars for affordable prices. I truly curse the person who decided gas was the best option. Think how the electric cars would be like today if they just had continued developing it! Pretty mind-blowing. ;P Oh great Goddess I'm good at these digressions. o.O  What I was saying...was...I think it's pretty to look at cars drive by, or even planes soaring above. Cause I think about the people in them... Where are they going? Do they have a family? Where do they work? Do they like Pepsi or do they prefer milk? Are they vegetarian or big steak lovers? Kinda nice not being so caught up in your own life all the time. :)

I've noticed something great in my window sill. It's this plant I've never gotten to bloom after taking it home. But after I moved it to the east window, it decided to show off some of it's stunning little pink flowers again. :D Sooo I'm happy happy happy! 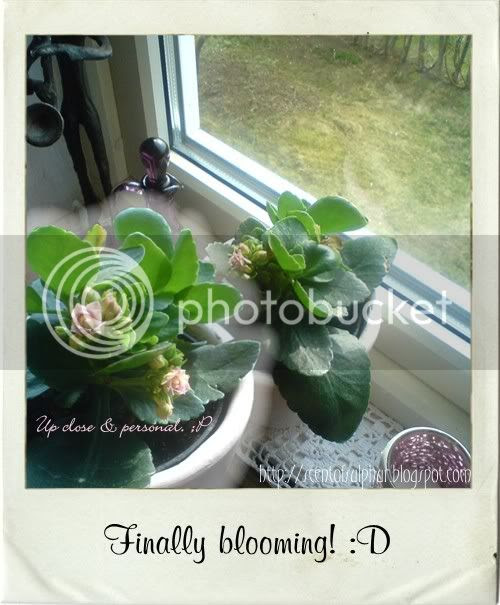 ...& the stuff I was looking forward to yesterday was this:

Clash of the Titans


Well I had to see the movie that had ancient gods in... ;P Wish they made more of those. Cause I know there's a lot of bible clasp'rrrs out there that doesn't even acknowledge the ancient religions. So the only way that kids can get a glimpse into that part of the world is through movies & books. I'm a firm believer in bringing up kids in your own faith. BUT you need to educate them in what came before. Take them to museums & cherish the past. Just don't bash their brains in with religious doctrine. Let them figure out stuff for themselves. & if you've forced something inside their head & they suddenly feel, that in their heart...that it's just not right - for them. It will divide that person in two. Now, you might wanna argue that it's not a good thing then...to show them that part of our world. But I would say that I'd rather have a child that's open minded - but not naive & gullible - & educated. Someone that appreciate all of the colors in the world. That has enough tools to be able to go out there & handle any situation...without looking down on someone cause they believe something else than them...& most of all have found his/hers beliefs...& that it's firmly placed in their heart.
Anyway...the movie was great! Except having to wear those retarded 3D specs. & Medusa...wish she wasn't that 'clean'...& why the hell those people stayed in that city when they knew it would be annihilated is beyond me. They could've just gone & visited an auntie or something & returned. But, in the end I really had a cosy time at the cinema...even though I pestered a certain young gentleman. :P But he does it to me every single day! o.O But if you're ever nearby then head over to the cinema. Love that place. It's in a mill in an old industrial area. With museums, library, cafes, loads of the country's history & even a tiny brewery...plus a river & a waterfall. :) Tiny but PWETTYYY! <3

Tired now...so I'll make myself some tea & head over to my bed. With a interior mag. of course. ;) I love to cut out ideas & glue it in a huge book with blank pages. Inspiration baby!!! ;)