Fluffy clouds & a scent of sulphur

Smelled like death in the house last night & today. Then I realized a volcano on Iceland had opened it's eyes...or ass...you take your pick. They said an ash cloud with poopy smell would breeze by our lovely kingdom. So I'm kinda hoping that's that. Cause the town we live next to...I do not live in it! ...so those of you that know me: I dooooo NOT live there! I live on the beautiful peninsula in the fjord just outside. *flowers hearts love love pink heart love* ;P ...back to the town: ...it's known for it's shitty scents. There's stories from the 1800s about people actually fainting cause of the smell...plus even dying. (A bit better now of course. :P) But I definitively don't need that smell all weekend. Cause it's vile! ...& if that isn't the reason the house smelled of Clamydia infested whores at a party in an old shrimp boat...then what the heck flew in & made this its final resting place?!?! o.O

Lots have happened lately. Mostly doctors appointments & occasionally the odd trip to the hospital. Latest one was today. Got my head scanned in a huge donut'ish device. Had to take out all my piercings...except the one in my lip. That made me a bit uneasy...cause it's not that far from the rest of them...but the lady said: "Trust meee!" ...& I did. ^^ Big step for me. ;P She said she was very fascinated with my make-up. :P That was kinda fun... :) Like it when it's a hint of sincerity behind peoples giggles. Most reactions is reaaaally over the top frantic, mixed in with a touch of hysteria. 'Cause you CAN'T go out looking like THAT!?!?' :) What? ...it's two thin lines going on top of my eyelids & a bit out on the sides. Then a bit of mascara & a bit of color  on my eyebrows. Cause I got completely blonde hair there if I don't color them. I don't do as most...wall up my face with foundation cream & powder on top. So it looks like they have a 4 O'Clock shadow. YES!!! It do look like they have that...cause all of their facial hair get either covered in goo or are completely the wrong color so they just stand out. It's as simple as that.  - YES FEMALES! You do have tiny hairs all over your body. It's nooormal! ...well, if you have long black strands of hair on your upper lip I do suggest a trip to a beauty parlor of some sorts. Cause I don't really think guys like the feel of a mustache tickling them when smooching. ;P Amazing what you can do with lasers these days. ;) Aaaanyyyhow... Most girls/women I've talked with can't understand why they have so crappy skin. Stop rubbing your face in with chemicals every single day & it might get better. ...just let your skin breeeeathe is usually my answer. :) ...& one more thing, stop pumping your mascara brush in & out the container like a mad(wo)man! It will dry that sucker out faster than you can say: "Uh?" ...ooooh & if you can, rinse the brush after each use. Cause it's a lot of bacteria on it...& it's no fun to get the red eye thingy when you're on your way to a hot date. ;P

I've had a little Eostre gathering too... Just a few friends & family eating, making things & going egg hunting. My sister was relentless in the egg hunt. She was jumping heaps of snow & had just murder in her eye. XD Was so fun to see... & she won of course. :P Ravn & my youngest niece Sara helped me decorate muffins...as you see on the pic there. :) She also drew a really funny drawing. :P & we made loads of egg carton flowers. 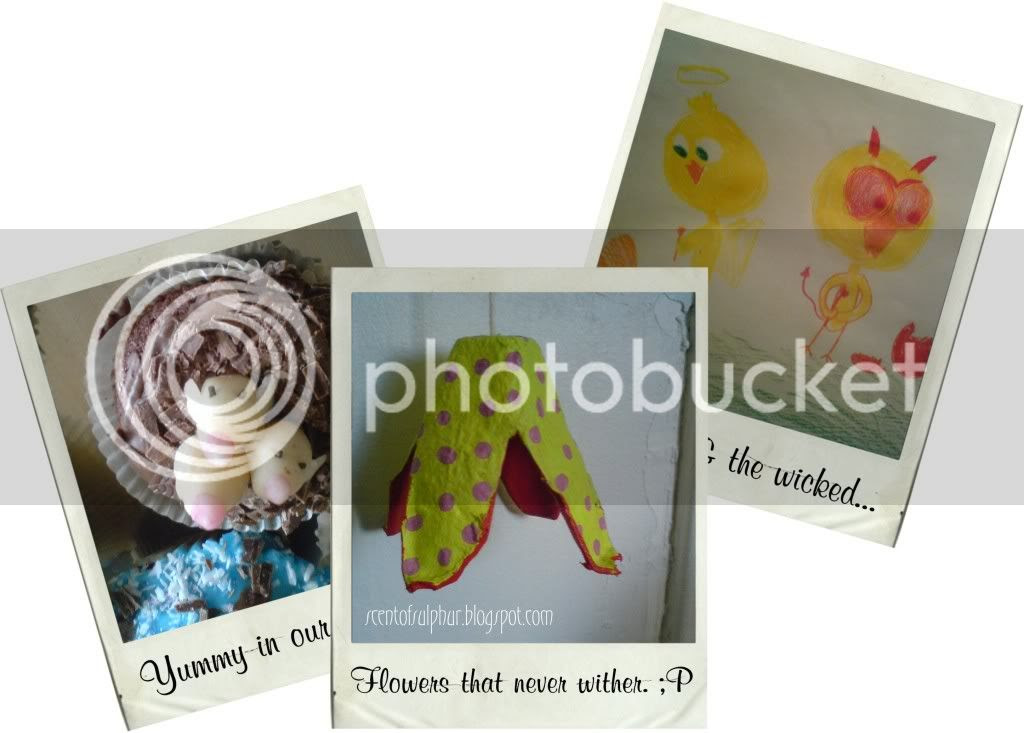 Also had a few movie nights with my friend Julia. We saw the movie Julie & Julia with Meryl Streep & Amy Adams. I really truly loved it! I got pissed off at Julie at times for not appreciating her husband more...but what do I know? I don't think I've done anything daily & actually stuck with it for a whole year...in my life! o.O But all of it made me think about doing one thing a day, that was just for me...& only me...something that made me happy. Making a pillow or a candle...small stuff like that. Would be nice to say: On monday I made a cake from a new recipe, tuesday I made a stained glass window, etc...

Damn...reading this I see that I've come a long way from capes & role-play. ;P The girl inside still wanna play hide 'n seek with the dark side. The woman in me knows that it's not worth repeating history. & the crone...well, she's just a 'lie in wait' kinda gal. ;P For the rest of me...I'm just on autopilot.